The general idea is to build a gamified branching-dialogue/graphic novel style onboarding/exploration of the Ethereum or wider Web3 space.

Why should this project exist?

Because explanations of these technologies are usually focused on technology itself & vague in terms of what it actually means for the user.

I think we need a fun way of introducing people to the space & sending them in different directions based on their background.

Originally, I was inspired by this now 4+ years old website called whatthefuckisethereum where a user selects “I am X” & the explanation of Ethereum changes.

To give you a basic idea of what I have in mind: 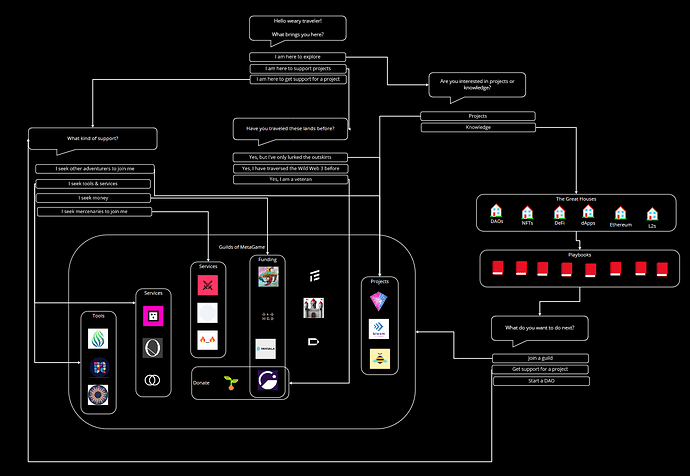 image1605×1108 115 KB
Basically, the user would talk to an NPC & the NPC would take them to different places based on answers the user chooses.

One of our members (blake) made this mockup of what a later version could look like: 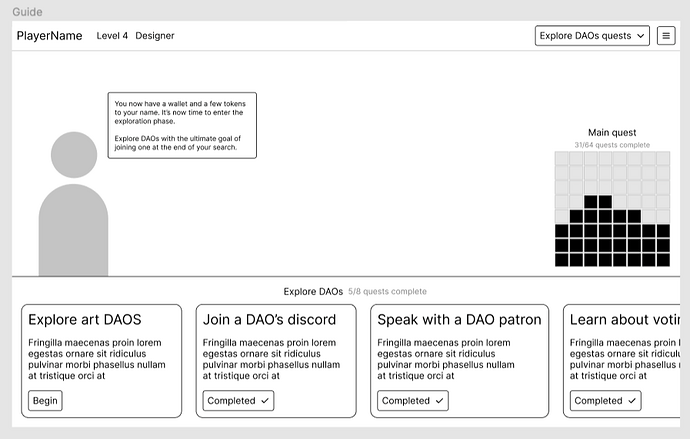 We can start simple:

This will help people deal with the chaotic self-onboarding of “everything is everywhere & I don’t even know what exists out there” & help them find their areas of interest in a more streamlined way.

Sounds good - I think the hardest part is to actually start the thing. So thanks for that. Please keep us posted on developments with dialogue as this is key to the experience.

Once we have that and shoved it into an engine we will also need visual art - but this can come when dialogue is where we want it.

@Tommy, @TenFinney, and I were talking about this in today’s Innkeepers meeting. Having a game-like experience would make MetaGame standout and naturally connect the dots between the builds we have. Enabling the ecosystem to use myMeta, MetaMenu, and MetaSys all through a glue named playing experience.

This branching you are saying is part of the narratives that @Misanth has talked about many times and that I brought up with the ultimate RPG discord bot.

It is to highlight that connecting these dots need to also bridge with Cryptovoxels. CV would enable to craft and give MG’s in-game assets as NFT that ppl can keep and display. I see CV as the playable version of what MyMeta shows in 2D.

This is some of the most exciting stuff I’ve seen in a while.

the website explains why Ethereum should matter to them as an artist.

That’s the goal, to make this space matter to people on their own terms. To cater to their own deep seated desires, to their own specific abilities and also to their own cultural niche.

If there is one DAO that can provide a multifaceted web3 onboarding that is sensitive to all these subtle factors, then that DAO is this one right here.

What is more, since we will be leading people to other DAOs, essentially advertising them, we will be contributing to the space as a whole in a more clear-cut manner. This can garner huge amount of support for the project by various other DAOs in terms of reach and funding.

Great to see some enthusiasm about it! Should we get started with this then? My main concern is championing it

We could start slow by having some calls and discussion and putting some ideas on the table. I think @Guru_Makasi would also be very excited for this.

I’m busy this month with some stuff, though. Can make time for calls, but don’t have time to do actual work. Can be available from February.

I think Cryptovoxels is awesome and we can do some fun nft mintgating things. Also the new stuff with Atlantis world seems to have a lot of potential on having specific onboarding classrooms with wallet integration and cool things. Wonder if we can combine the ultimate rpg type game bridged between discord and Atlantis world.

that integration would be dope!
It makes sense to me to support Atlantis World in a collab with MG.

You should all know however that there are many web onboarding projects already such as Station, Civics Unplugged and others, all having different focus groups and addressing different problems. We should first have a good look around and see what other similar projects are doing so we don’t overlap and create competitive market dynamics (@Pronoia42 can you make a brief list of new web3 onbaording projects if you know any?)

This is very important. Market Research.

We need that Shillers engage into more marketing professional work. But for that we need more Shillers xD.
Today, a potential shiller was onboarded by @_Anna. Hopefully she stays.

Champs. Here is the baseline of the dynamic article I was thinking. This in the line of doing things that reduce the headhunting effort/automatize it while also contributing to the Onboarding Machine goal.
I need help by someone knowledgeable in AirTable or Discord bots to turn it into a responsive artifact. 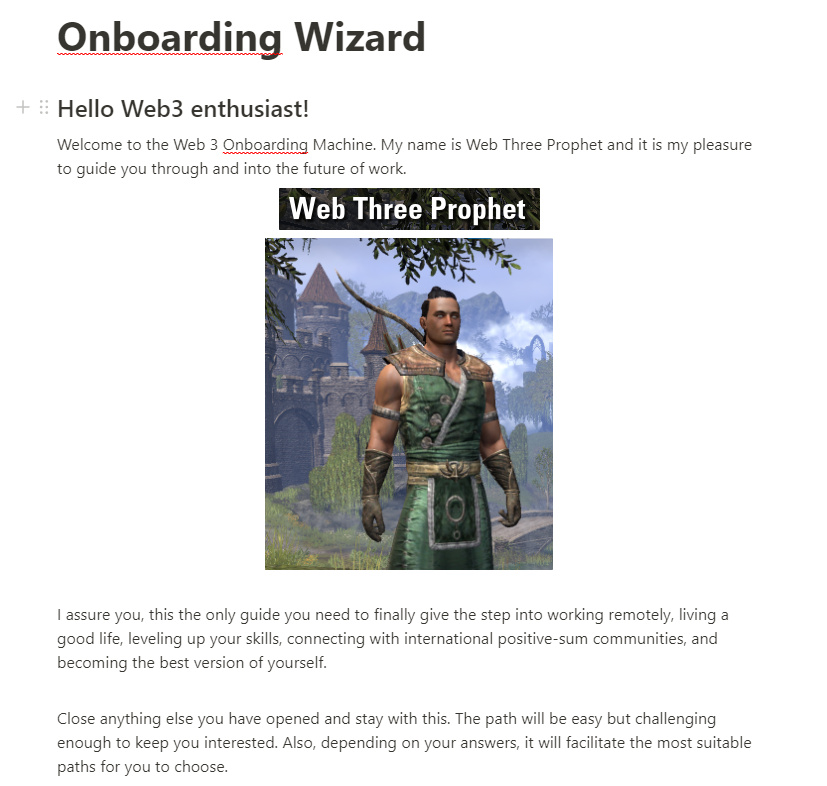 Click the image to check the (to-be) dynamic article.

Pls notify here who is leading this initiative and what’s the status so Shillers can improve comms: https://www.notion.so/meta-game/Season-5-Shilling-Strategy-a1a2a812a79d4cc1ba0125644ef57963

The onboarding game? Weren’t you leading it?