The 4 Domains of MetaGame: An Organizational Structure v0.2

I’ve attempted to map the main domains inside MetaGame, what roles belong to each & what are their responsibilities…

I split it into: 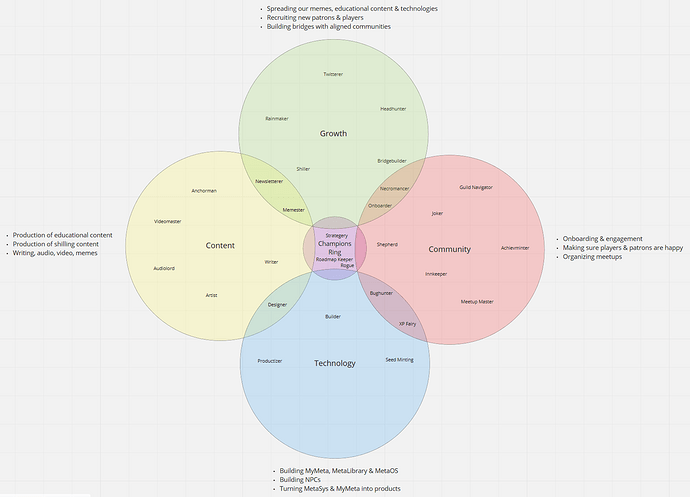 -innkeepers-guild domain with most of the roles within being simply higher-up-the-skill-tree specializations of the basic Innkeeper role.
Their work includes things like onboarding & making sure people are engaged. They do this by directly engaging them, organizing cohorts & meetups and carrying out other innkeeper tasks.
Their current top goal is to make sure players & patrons are happy, again, by doing things like the above + making sure players are heard, their problems are solved, their contributions are recognized & rewarded properly both through Seeds & achievement NFTs.

-artists-guild domain, taking care of operational stuff like meeting notes & newsletter, and the raids such as #

-video-content.
Their work is maintaining high signal within the community with note-taking, newsletter-writing, news-making & production of educational as well as shilling content - for which they coordinate with the Shillers.
Their current top goal is to build the wiki into MetaLibrary - an educational hub for anyone interested in DAOs & dApps, but also a bunch of related educational content inside of it, helping people level up their game.

A domain of the #

-builders-guild, making sure MetaGame-as-a-platform actually happens rather than MetaGame staying just a discord-based community forever.
Their work is building things like the MyMeta profiles & getting them to a point where they are usable by other communities outside MetaGame.
Their current top goal is building the MetaOS which will contain the above mentioned MetaLibrary & MyMeta as well as all the other pieces of MetaGame displayed on the MetaGame Universe board.

-shillers-guild domain, here to communicate MetaGame to the external world. They do this in form of blantant shilling & swarm shilling to more insidious ways - infiltrating other communities spreading tentacles & memes.
In short, their work is to spread the gospel of MetaGame & convert the non-believers into followers of Nova. To do this effectively & well informed on all the pieces of MetaGame that need to be shilled, they communicate extensively with all the other domains as well as coordinate on developing an overall strategy.
Their current top goal is curating the best in MetaGame & spreading it to those most likely to get infected with a focus on builders & patrons.

Champions Ring is a domain of high signal & high stakes, comprised of the Champions of MetaGame (leaders of specific raids & guilds), of which there are currently 19 players.
Their work is making sure all the champions stay accountable on doing things they said they’d do & help each other deal with roadblocks.
To make it clear, the Champions Ring is not an exclusive club. Any random Rogue that comes up with a great idea & wants to take initiative, can become a member.
Their current top goal is hatching a coherent strategy & roadmap for the next season (Summer) & the rest of Phase I (2 more seasons; Summer & Winter), getting it improved & approved by the community then making sure we stay on track.

What do I do with this?

How about help me improve it?

Please point out to anything you think is wrong, could be done better or is completely missing