The fact that you, being a human, have a question - means other humans might have the exact same question. If these questions aren’t asked, we’ll fail at progressing with MetaGame.

We NEED your questions so we can patch the holes in our explanation content and build a “frequently asked questions” page on the Wiki.

The main problem people have with MetaGame is not being able to understand it.

This is a big and unsolvable problem with anything really worthwile. People in modern (complex) world should be more accustomed to not understaing “everything about something”. On the other hand you have gazillion of things that nobody can understand for a reason: because they don’t make sense.

With bigger Visions you have three challenges in general:

I personally am still deciding where to invest my time but at the same time am making big changes on myself. I’m not a big direct collaborator but I bite slow bites and tasks over loooong periods of time.

Maybe it’s worthwile to give focus on the “longevity of vision as well”. For example, once you hear about the MetaGame (and just this name is enough), you cannot exit it anymore. This rule would help with basic things like - is the community actually growing? How would you tell if it is really decentralized and not even everyone is earning any points? It is easy because the MetaGame word combination has to spread faster than people are dying… and this is easy with modern tech. And they have to hear about the MetaGame not too often but just often enough… small touches… because something ever-present cannot completelly hijack you or you feel contained. Maybe the notion of MetaGame not being something “new” would also help… maybe it has existed forever and some people tap into it a bit more in modern times because they just have better tools, more leisure time and so on.

The main problem people have with MetaGame is not being able to understand it.
We have many blind-spots in explaining it, and they need to be addressed.

I would agree with that, I do feel a better summary could help.

Having recently took a deep dive and tried to consume as much information regarding MetaGame including reading through Pillar Articles , I have to admit that it feels very overwhelming at the start.

In the very first quest, there’s 8 articles to consume. I think I read on the Gitcoin quest that it’s recommended that people should take 45 minutes to read through all 8 of them to take on the challenge, that’s a serious amount of time to figure out whether or not you want to be a part of something and I think the very first time I came across all of the information back in January 2020 I was put off.

“I don’t have time to read through all of this” - That was my honest reaction.

Investors don’t spend 45 minutes reading through whether or not they want to invest their resources (in their case capital) into the startup pitching to them.

DocSend did research into how long investors generally took when looking at pitch decks - on average under 4 minutes .

Our “investors” are any potential reader or newcomer onto the MetaGame website, they want to be convinced if they want to invest (in their case time & effort) into this project or not.

I’m not suggesting getting rid of all 8 articles but instead try and shine attention into a better summary / intro into what MetaGame is and how we want the viewer / reader to be apart of our journey.

I loved the video included in the In Search of Commons that Scale write up, very powerful message contained with that and perhaps if MetaGame had its own powerful message in a summary / introductory video it would help prevent confusion and hopefully more quickly convince others to join.

Hope this post isn’t taken the wrong way, felt it would be important for me to share honest thoughts after recently joining as sometimes it helps a lot to have a fresh pair of eyes to look at something with no bias or opinion beforehand.

Got a couple questions which I’m wondering right now:

I do feel a better summary could help

Agreed. The “WTF is MetaGame” article is really outdated and frames MetaGame extremely narrowly, as being about breaking down information silos… It was also too long, a 10 minute read itself.
I’m writing a new one here, would appreciate some feedback.

The decision to invest should definitely happen before reading for 45 minutes.
Reading for 45 minutes is the first investment, and part of the reason the bar was set so high was so that new players entering the game feel already invested by the time they enter.

The landing page + the 5 minutes “WTF is MetaGame” should be enough for people to decide whether they want to spend time or not. Then, they may proceed by completing the first quests, or even better, by finding other ways of contributing directly.

That said, I do think we should tone it down to “6 Pillars” to begin with, after we publish the new “WTF is MetaGame” which should also be 50% less reading time

What’s the difference between Levels 1, 2 and 3 listed in the quests? After completing quest 1 I was promoted to MG Player, does each level result in a better role on Discord and access to more channels?

Yes and no. By the time you’re level 3 you should probably already be in the silver league and have a better role on Discord. The idea was that earning a certain amount of XP results in higher player level, but right now, those levels aren’t really connected to anything & don’t mean much.

Why were the 3 quests decided to be the 3 introductory quests? Are there desired outcomes / goals of each quest?

It actually used to all be one giant “becoming a MetaGame player” quest, but it was getting too long so I chopped it up to 3 quests

Hope this post isn’t taken the wrong way, felt it would be important for me to share honest thoughts

Oh man, I really hope more people will be like that. We’ve created a really friendly environment here & I’m actually afraid that sort of atmosphere will prevent people from surfacing criticism.

We NEED your questions so we can patch the holes in our explanation content and build a “frequently asked questions” page on the Wiki.

hey hey, like my experience here so far.
I’ve been spending a couple hours reading through docs and articles!

So far what I understand is that the community is focused on a few projects:

Would be awesome to have a project based view of the activity!

When it comes to the goal of Metagame:

“MetaGame is a Massive Online Coordination Game. An open-source framework for autonomous humans and decentralized organizations, to coordinate in creation and exchange of value with the least friction and most fun possible.”

Is the ultimate goal of MetaGame to become a hub for experimentation around coordination tools?

Would be awesome to have a project based view of the activity!

How do you envision this?
This is the closest thing we got: 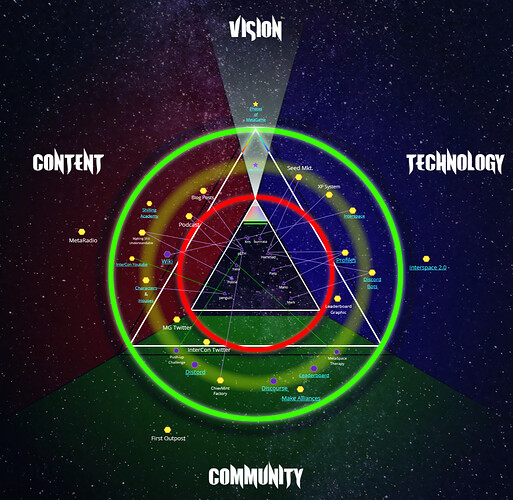 Is the ultimate goal of MetaGame to become a hub for experimentation around coordination tools?

It seems that I overlooked this. It definitely does the job!

Awesome, will keep digging and see if i can add value somewhere

What’s the rationale for a Web of trust approach on MetaGame?

The XP system is inherently Sybil-resistant, so I don’t understand what would be the purpose of adding friction with Web of trust.

Is there any additional information somewhere about the Web of trust idea/spec for MetaGame? I spotted the mention in XP, Seeds & Quests.

We’re not aiming for sybil-resistance but a trustfulness gauge… Your XP earned might be a good measure of how useful someone is, but, a) it tells nothing about whether the person is actually trusted and b) XP is MetaGame-specific, someone joining later as a freelancer might have no chance or wish to work on something directly for MetaGame. c) it might actually turn out to be more friction as you’d have to put in X hours to earn XP, vs. simply having your friends who invited you to MetaGame “add you as a friend”.

Some may find the Hitler Rants (Downfall parodies) distasteful, but they are actually VERY powerful in getting the message across about incumbents being challenged and realizing they are going to lose.
In our case profit based capitalisms vs collaborative efforts like Metagame.
I’d suggest to create one if the Community finds it OK.
Again, we live in a sensitive world, so it may not be the best idea for this project.

Ha, I actually had this idea already, absolutely love it!
Do you do video production; interested in this? Or should I ask one of our video people?

This has helped me more than anything trying to figure out what to do first here.
So quests can be reading? This is the first sense I’ve had. I agree with an earlier poster about being willing to go by feel being important. I’ve quickly gathered my understanding will come slowly.

There certainly is a lot to grasp so it can be overwhelming at times, we’re still working on simplifying the onboarding process

Reading can certainly be a quest just like anything, if it is posted as such. You can still connect with others and generate xp reading, recommending etc in the #Reading channel on discord. Generally, along with posted quests in the quest channel, you can look at “raids” as quests, Active and Passive ones are projects that need work on so if you feel you can contribute, thats certainly a rabbit hole to hop in. Cheers!

There are currently no reading quests, once upon a time, there were “intro quests” and they were about reading the “pillar articles”.
We removed those quests after Seeds became tradeable so as to not have people easily game the system, and paying people to learn about a project didn’t seem like the right way to go anyway.
There will probably again be reading quests, both as in reading about metagame & generally reading something, but most likely they will not be rewarded with money.
Unless! You also created value by reviewing & recommending the book in the book club, in which case you can just go do that now without needing any kind of quest to do that

Seeing this 11 days later, how far has your understanding come?

I’m getting it better and better.
1Hive and life have been keeping me busy, but I look forward to diversifying, and I love doing reviews.

Edited to add: I’m looking forward to our mixer I think this Friday on Discord.